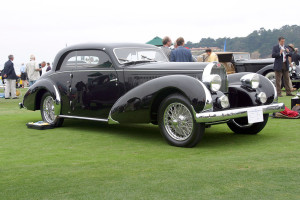 The model Bugatti Type 57 is a touring version of the racing car Type 59. Both these models were installed inline eight-3,3-liter engine with a double overhead camshaft with solid four-speed gearbox. In the period from 1934 to 1938 were collected 800 cars.

A large part of the car brands there are not more than a century. However, there are exceptions in the automotive industry - a company is a Bugatti, the history of which could sad end in 1932 due to financial problems. Then Bugatti was staged a clinical death, but in the course of the history of the company intervened in case, due to which in our time, the whole world knows about the manufacturer powerful sports cars.

It all began in 1908 in Germany. A talented artist and engineer, and later a successful industrialist - Ettore Bugatti (Ettore Bugatti) creates his first car. It is Bugatti Type 10, the appearance of which was very similar on Coupe des Voiturettes Isotta Fraschini 1908.

The first car designed and collected in the basement of the house Bugatti, in Cologne. The car was installed in-line 4-cylinder eight valve engine with a volume of 1,131 CC Car was far from perfect, but the chassis Type 10 was recognized as successful. Subsequently it was used in the development of other models Bugatti.

Classic car "Bugatti", almost half a century in dust in the North of England would soon be sold. And price, experts believe, may reach 3 million pounds ($4,35 million). 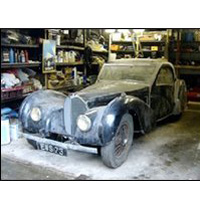 Auto - Type 57S Atalante release 1937, was discovered in a garage doctor Harold Carr, a former army surgeon from Newcastle. This man, who was noted during the life of a tendency preference for solitude, bequeathed to the relatives of the contents of his garage. In it, besides Bugatti stood still and classic Aston Martin and Jaguar E-type.

Soon - in February - Type 57S Atalante (it is believed that such was constructed only 17 copies) exhibited in Paris at the auction, which will hold English auction house Bonhams.

Found a treasure nephew of Dr. Carr, an engineer from Newcastle. "We just could not believe it," he says. - Of course, we are excited and we're going to divide the money between family members. What a wonderful inheritance!"

Initially, two-seater sports "Bugatti" belonged to count Howie, the first President of the British racing drivers' club: machine was delivered to them immediately after Assembly and was held for eight years.

Then count Howie sold out and the car a couple of times passed from hand to hand, until in 1955, Dr. Carr not bought it from the Lord Ridley, petty nobleman from the County of Northumberland. After that, for several years he travelled on "Bugatti", and in 1960 put it in the garage and not touch it until his death. The mileage driven is surprisingly small: 26 thousand miles (42 thousand kilometers).

"I knew about this "Bugatti" for a number of years and, like other dedicated't dare anyone to disclose his whereabouts," says James knight, head of international automobile branch of the house Bonhams. Is, without doubt, one of the great discoveries, which are sometimes made in the barns".

"Atalante incredibly original and, although in need of restoration, it will be a restoration in the best sense of the word, - adds the expert. - As a result of the new owner, who will be very narrow, a selected number of owners, will get a truly gracious project - to play such an integral role in the return to life of this wonderful vehicle."

"Bugatti" 57S is one of those cars, which passionately seeking collectors: at least four of them owns the national automobile Museum in the French city of Mulhouse; the rest are in private hands.
Collapse